The 72 meters long wooden needle dam is a replica of a historic wooden bridge. In this spot, the rafted logs were caught by a system of poles, counted, and directed from the Vydra river into the Vchynice-Tetov canal, which begins here.

Needle Dam „Rechle“
Moreover, it regulated the flow rate in the canal. The openings in the floor were meant for the poles which caught the rafted logs when there were low water levels. Then they held the timber up until water levels were pumped up by a higher wave from the surrounding ponds. The original, over 200 years old, bridge was removed in 1953. After the end of timber rafting, it connected Rokyta and Modrava and the wooden pieces were torn down after it ceased being used thanks to a newly built road through Antýgl. In 2002, it was renovated using the National Park and CEZ funds. Part of the areal is also a so-called fish crossing, which allows a more comfortable run of fish. Today timber rafting is organised by the National Park administration to display tying rafts. The water which is redirected from the Vydra river powers the turbines of the Vydra Hydroelectric plant.

Another needle dam was also built on Otava in Dlouhá Ves, where the timber was caught, pulled up and stored. You will learn more about that on the Dlouhá Ves stop of this trail. 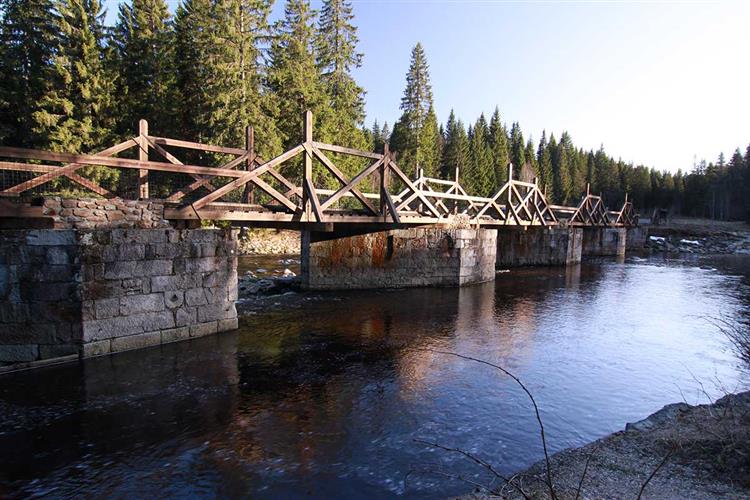