The village of Opolenec (Oppelitz in German) is located on the southern slope of Borovina hill at the altitude of 650m, some three kilometres to the north-west of Kašperské Hory. The first written record of the village dates back to 1436 when it was in holdings of the town of Sušice. Later on, until 1548, it formed a part of the domains of the royal Kašperk Castle. With clearance sale of this extensive property the village together with others in the neighbourhoods fell into the ownership of the royal mining town of Kašperské Hory.

This small village has been extending modestly but picturesquely on the southern slope beyond the Opolenecký stream, half-way between Kašperk Castle and Kašperské Hory. The first written record about Kabrlík comes from 1426, mentioning the St. Wenceslas mine and gallery under the village called "Geyerle". In 1585, the king Rudolph II let the Kašperk Castle together with Kavrlík to the town of Kašperské Hory. The oldest history of the village is the most likely linked with gold mining.

The village of Červená lies at the distance of about 3 km from Kašperské Hory on a small tributary of the Losenice. It got its name (meaning "Red" in Czech) from crimson colour of the flint containing gold that used to be sand-washed here. In the centre of the village there is a smaller Chapel of Our Lady of Perpetual Help (kaple Panny Marie Pomocné) from 1856, renewed in 2010. The village offers beautiful view of the surroundings, in close vicinity we can observe pasturing herds of bison.

Červená is a starting point of excursions to the charming valleys of the Zlatý and Losenice Streams, to the Celtic forts Obří hrad (Giant Castle), or to the place of extinct glass-works in Podlesí - Vogelsang.

The decent village of Tuškov (Tuškovy, Touškovy, Duschowitz) also belongs to the dominions of Kašperk Castle. It spreads in the beautiful landscape on the southern slope beyond the valley of the Opolenecký Stream along an ancient road that has been connecting Kašperské Hory with Sušice from time out of mind, 2 km to the north-west of Kašperské Hory, at the altitude of 640m. In 1436 it was mentioned amongst villages in holdings of the town of Sušice. Later on, Tuškov became a part of Kašperk Castle dominions. During the reign of Rudolph II, in 1584. Tuškov together with other villages and attached lands got to the ownership of Kašperské Hory.

Podlesí is a small settlement located 3 km to the south of Kašperské Hory on the northern slope of stately Huťská mountain at the altitude of 790m, surrounded by forests, meadows, pastures and old trees, mainly limes and chestnuts.

In 1584 the Emperor Rudolph II sold a part of the mansion of Kašperk Castle together with the glass-works to the town of Kašperské Hory. As a part of the deed of sale, the urbarium of newly purchased settlements has been preserved. This mentions two glass-works in Vogelsang with their foremen Lienhart and Tomas. In 1840 the village included 14 estates with 150 inhabitants. The remains of an original farmhouse and the Baroque St. Barbara Chapel from the 17th century have been preserved.

In vicinity of Vogelsang there is a range of attractive natural monuments as for instance the Flusárna plain. Its uncommon name relates to glass industry, wide-spread in the region at the times, where one of the raw materials for glass-making was so called "flus" (from German) or potash - an important ingredient influencing properties of final glass. From Flusárna there is a beautiful view of the town of Kašperské Hory with Kašperk Castle in the background and of the valley of the Losenice River. It is also possible to visit the memorial of the air crash from 1937, the marks of the Golden Path or settlements Velký Kozí Hřbet and Malý Kozí Hřbet with chapels in the village squares and nice views of the landscape surrounding Kašperk Castle. 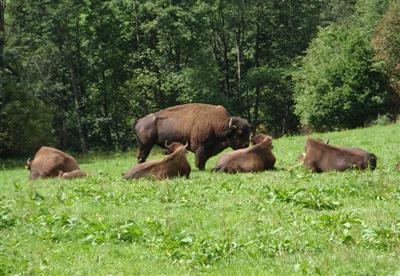 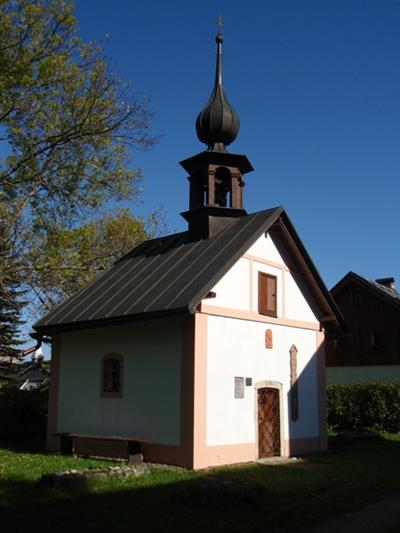