The gently undulating plateau of the High Bohemian Forest is home to large swatches of fens and bogs.

The majority of this extensive peatland is within the Šumava National Park in the Czech Republic.

On the Bavarian side, there are only a few small mire formations up on the ridge in the area of the Central European watershed (between the Danube and Vltava).

One of the most important wetland areas is the so-called Latschenfilz with its mysterious Latschensee lake and Hintere Sulz area.

Farmers from the region around Zwiesel used to have the right to take their cattle up into the forests to graze during the summer months. The herders appointed by the farmers stayed with the cattle (primarily young cows) in the period between June and September in the high-level areas of the Bavarian Forest.

Over the course of time, this usage gradually created forest clearings and soon pockets of tree-free mountain pasture emerged which are known locally as “Schachten”. The herders mainly used these areas as safe havens for spending the night, or resting during the middle of the day.

All commercial use ceased in the 1950s.

Many of the deciduous trees which previously served as shade for the herds of cattle have now grown impressively tall or become mighty relics.

Nowadays, the intention is to preserve these forest-free pastures as witnesses to the cultural history of the region moving forward. 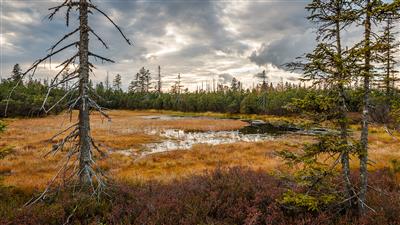