The village on the hillside of Javorná formed the basis of the Zejbiš settlement. The oldest mentions of Zhůří date back to the early 17th century. The village was founded by lumberjacks and charcoal burners who made charcoal for the glassworks and hammermills in the area. In the middle of the 18th century, the local glassworks was first put into work. The originally wooden, later stone, church dedicated to the Holy Trinity dates to more or less the same time. The church burned down several times but was always renewed.

By the beginning of the 20th century, Zhůří also had a presbytery, a school, two pubs, a mill, a sawmill, and a hammermill. Since 1913 there was also a post office with a telephone connection and a gendarmerie. The village also had a water pipeline and two hydroelectric power stations. Between the two world wars, the village had over 600 inhabitants, mostly of German nationalities.

By the end of the war, on May 5, 1945, a battle between Germen cadets and members of the American 90th Infantry Division took place nearby Zhůří. 10 American soldiers were killed and more wounded. 24 German officer cadets and members of the Hitlerjugend were also killed. Most houses were damaged, several burned down, the church lost a roof. Locals fled the fighting into nearby villages Javorná and Kochánov.

After the end of WWII, German inhabitants were forcibly displaced from Czech lands. Zhůří was then re-inhabited by emigrants from Slovakia and Romania. In February 1948 a Czech school opened in the village. In April and May 1952, the new inhabitants were also forced to leave and Zhůří became a part of the Dobrá Voda proving ground and eventually razed to the ground. The nearby Snake hill (Hadí vrch) towering above the village became a tank training ground.

After the dissolution of the proving ground in the 1990s, the former village was transformed into a memorial site. In the place of the former church stands a chapel and a Cross of Acceptance, which reminds us of the sad fate of the Šumava village. There are two wooden death boards with Germans inscriptions. Near the chapel stands a granite memorial of the fallen American soldiers. Nor can one miss the large memorial trees planted around the former village and on the side of the Snake hill.

At the beginning of every May, there is an annual reminder of the battle of May 5, 1945 and an act of remembrance for the American soldiers. Occasionally there are also memorial events for the former village.

The place is not accessible by a car. Recommended hiking entrance points are: 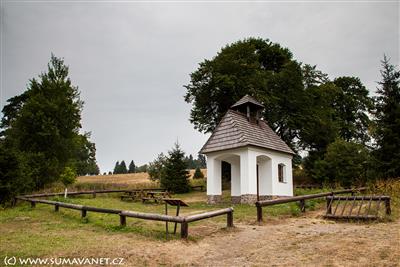 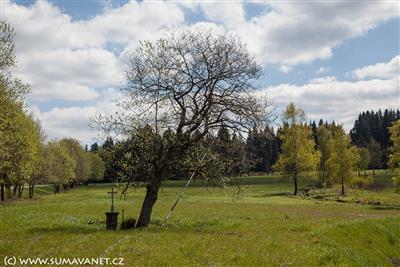