The ridge of Pancíř is the most sought-after mountainous ridge in the whole region of Železná Ruda. The ridge is accessible from Gerlova Huť, Železná Ruda, Špičák, Brčálník, Hojsova Stráž and Zelená Lhota. The easiest way to get there is by the chair lift from Špičák with a middle station Hofmanky by the hotel Horizont, where the tourists may relish fantastic views of sunset behind Velký Javor and of the Alps. The ride on the lift itself also offers beautiful views of the Royal Forest and of Falkenstein. The lift is in operation year around, except for the maintenance periods in autumn and spring. Two of a few classical chalets in the whole region of Železná Ruda may be found on Pancíř and on Prenet. The chalet at Můstek mountain burned down ten years ago. From the peaks, especially around Pancíř and Můstek, the tourists may admire splendid views of the surroundings.

Three rivers spring on the slopes of Pancíř maintain, with the main European divide passing through there. The Úhlava and the Křemelná flow into the North Sea, while the Řezná to the Black Sea.

To get tot he top of Pancíř mountain, the tourists may take a chair lift, the track of which is divided into two sections. The first one starts in the aforementioned Špičák station with the main ticket office and is 1453 metres long. The engine for both sections is located at the transfer station Hofmanky. The second section is 1285 metres long and ends up at the terminal station Pancíř.

On the top of Pancíř, the first simple wooden lookout tower was built on 1880 already. The new lookout tower attached to a chalet with a restaurant named Matušova was put into operation on 28th September 1923. Its construction had been completed in only five months. At the northern side of Pancíř, there is a piste with a ski lift.

One of the most beautiful Šumava views of the Royal Forest, of the main Šumava ridge with Debrník and Poledník mountains and of the side ridge with the peaks of Polomy and Sklářský hill, opens from the peak of Pancíř. Also the German Grosser Arber (Velký Javor) mountain with typical towers of a radar station and of a transmitter as well as of the chalet Arberschutzhaus seams to be within a reach of the hand. At favourable visibility conditions, mainly in autumn and winter, one can often admire the unforgettable view of the Alps. Sometimes in autumn, the whole valley beneath is cast with fog and low clouds, while the weather on the top of the mountain is clear and warm.

The highest peak of Pancíř ridge lies on the route of the medieval trading path called Výšinná (In the Heights), heading from Pancíř to Železná Lhota. In 1924 the mayor of Hojsova Stráž, Michal Ernst, let build here an 18 m high lookout tower and a chalet named Na Můstku. After the World War II, the chalet served as a recreational facility of the company ČSD (Czechoslovak Railways). The chalet unfortunately burned to the ground during the Christmas holidays of 1995 (on 26th December). The ravages of the hurricane of 2007 can be regrettably seen the most in the surroundings of the mountain.

On the peak of the small Prenet, there is a chalet with a hotel. In the 15th century the Chapel of St. Cunigund used to be here, in the neighbourhoods of which lived a hermit. (The chapter Local Places of Interest No. 6 - Religious Monuments, covers more information about the chapel). It was surrounded by a small settlement. Vast meadows under the peak of the mountain offer splendid and faraway views of the inland.

The Úhlava river springs on the western slope of Pancíř, at the altitude of 1100 m, nearby the Sand Road (Písková cesta), leading across the slope of Pancíř to the Tomandlův Cross, from where it is heading to the north-west, forming a deep valley in Brčálník which divides the Royal Forest from the ridge of Pancíř. In Hamry, which is located in the valley, beneath the Black Lake, there is a hydro-power station and a water reservoir built in 1930. At its upper stream the river has a character of a mountain stream of a steep decline, but it gradually grows in size, especially after confluence with the streams Zelenský, Černý and Bílý.

The dam of Nýrsko was built in 1964-1969 behind the village of Zelená Lhota. It is extending at the territory of 141,59 hectares and has an earth dam of 36 metres in height and 320 metres in length. The reservoir supplies drinking water to the regions of Klatovy and Domažlice. Further down by the stream the river also supplies drinking water to Pilsen. Nýrsko dam has the clearest water of all reservoirs in the Berounka catchment area, without any algae and blue-green algae, which makes it highly suitable for treatment.
The river passes by Klatovy and round the castle of Švihov, flows through the château park of Lužany, through Přestice boasting of a monumental temple built by the famous Diesenhoffer family of architects, and finally in Pilsen flows into the Radbuza river.

The mountain meadow Šmauzy is located in the Prameniště (the Source Area) Nature Reserve on the slope of Pancíř ridge and is interconnected therewith by the yellow tourist mark, which is also leading to the important crossroads on the ridge named Tomandlův Cross. A small village with the glass-works used to be in the location. We can still notice the buildings remains at the left-hand side of the tourist path ahead of the stream. On the right side, there is the edge of an elevated peat bog, where springs one of the most beautiful Šumava rivers - the Křemelná. Only a few kilometres further the Křemelná already beautifully meanders beneath the place of former Zhůří village to continue its way in the romantic valley of Frauenthal nearby Prášily and to carry on by a deep canyon behind Stodůolky. Several kilometres further down the stream the Křemelná confluences with the Vydra to form the ex gold-bearing river of Otava - today so popular amongst boating men. It takes 113 kilometres for the river to come to its confluence beneath the castle of Zvíkov.

The last river springing on the slopes of Pancíř ridge is the Řezná. Its source area is situated by the road from Hofmanky to Gerlova Huť at the altitude of 1050 m. The river drains water from the whole of the Železná Ruda basin and after 8 km of flow continues as the Grosse Regen to Germany, where it empties into the Danube in Regensburg to bring its waters into the Black Sea. The river also supplies drinking water to the whole area. Its upper stream with several dams is a real paradise for fishermen, who can often boast witch such catches as are catfish of up to two metres long and with over 50 kilograms of weight. The regions of Železná Ruda and Alžbětín are natural habitats of Otters and Beavers.

The chapel lying in the place called Suché Studánky nearby the extinct Kohlbrausch's farmstead on the plateau of Můstek mountain, which is accessible by blue-marked tourist path, has become a meditation retreat for the lovers of nature. Behind the plateau, there is an upper part of the Nature Reserve Městišská Ravine. 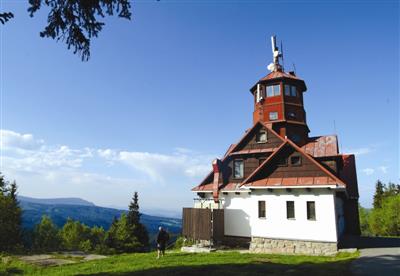 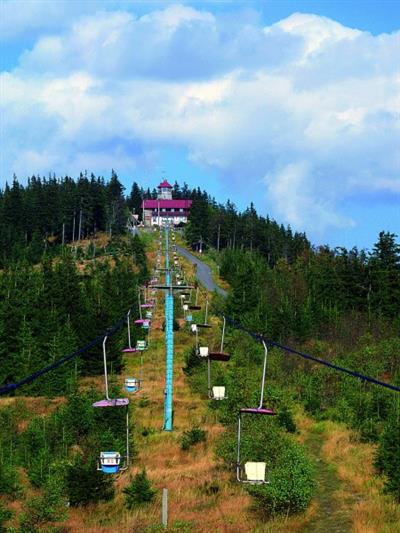 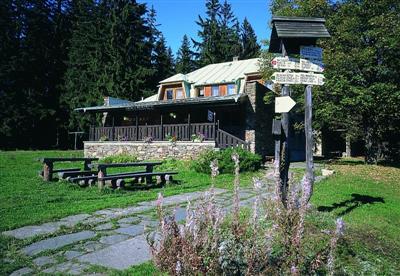 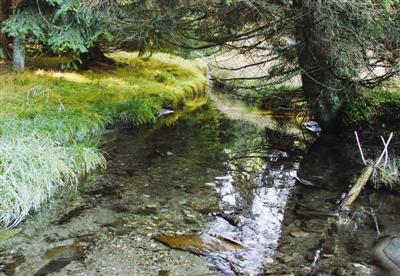 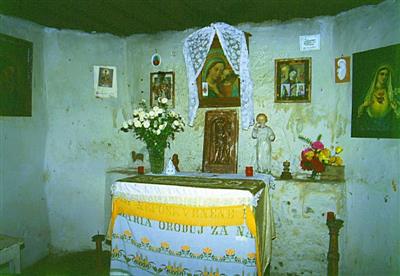